Tis the season in which everyone will want to share the lows of 2020 and their hopes for 2021, vaccines, freedom of movement and normality....

Tis the season in which everyone will want to share the lows of 2020 and their hopes for 2021, vaccines, freedom of movement and normality....

Tis the season in which everyone will want to share the lows of 2020 and their hopes for 2021, vaccines, freedom of movement and normality.

Not me! Well, not the bad stuff because at least here in Aotearoa we have an awful lot to be thankful for and we end the year pretty much normal anyway.

It has been a challenging year for sure and tested our company’s leadership, processes and systems. IMMagine came through it in great shape and I couldn’t be more proud of the team. If you’d said to me in March we’d finish the year in such strong shape I’d have asked you what drugs you were taking.

On a national level, here in Aotearoa New Zealand the economy roared back and grew by 14% in the September quarter having fallen a similar amount in the second quarter. Australia has also seen a strong return to economic ‘form’.

Unemployment in NZ is sitting around the 5.5% mark - not far off its 25 year median. A percentage point higher across the ditch but still better than many had anticipated a few months ago.

Aotearoa New Zealand is a little war-weary and battle scarred to be sure. New Zealanders are now reaping the reward of the disciplined and collective approach that as a people we accepted back in late March to keep this virus at the border. I never realised what a compliant bunch New Zealanders were and whether you think this is a blessing or a curse, I can tell you it served us well on this occasion. Mistakes have been made along the way and once again I’m reminded that big Government has its weaknesses but also its strengths. The Government kept secret a fairly damning report on its handling of the virus written by a Labour (current Government) friendly apparatchik until Friday, the last day of the Parliamentary year so it couldn’t be challenged on its performance. The authors pulled no punches and suggested there was an element of good luck as much as good management that we’ve not suffered from Covid as a great many other nations have. But I’ll take it.


I get the feeling we are one tired Government official working at the border away from more community transmission (as seems to have happened the past few days in Sydney). Hopefully the nationwide vaccine roll out slated to begin in March 2021 will prevent any long lasting damage to either country and we can look to an easing of the border restrictions.

INZ has, in its handling of border exemptions, proven itself once again to be a government department that behaves like a headless chicken and is extraordinarily inept. Extraordinary circumstances demanded extraordinary leadership. They failed big time. At least we end 2020 with opposition lawmakers and the media now starting to question what exactly goes on inside INZ. I continue to hope 2021 might bring some action and the Auditor General investigating the circus that is INZ.

However we got to this point, thanks to or in spite of the Government we end 2020 living for the most part in a country not totally dissimilar to this time last year. For that I’m sure we are all grateful. And I hope we don’t get complacent.

I’ve no intention of ending 2020 on a downbeat note.

I’ve just spent a wonderful three days walking the Routeburn Track in Te Wai Pounamu (South Island) with my wife and some close friends. It’s almost become something of a tradition - in our view no matter what the year has thrown at us having the chance to escape to a place so beautiful words (and for the most part photographs) cannot do justice, is for us a real decompress. No wifi for three days!

This part of the country is a land of epic geological proportions, a landscape formed by active tectonics and water - both liquid and frozen. The mountains continue to rise by around 17mm a year - might not sound much but in geological time it’s a sprint. The highest are perpetually covered in snow and the tallest Aoraki (‘cloud piercer’) is 3720m. We climbed as high as 1500m on our hike.


At this time of year only the highest peaks are snow covered thankfully.  In winter the snow fills the valleys as well so the great walk we did last week is restricted to around five months a year. Successive ice ages have ground deep U-shaped valleys from the sky to the sea. Between 3000 and 9000mm of rain feeds not hundreds but thousands of waterfalls, streams and rivers and drenches the forests. These waterfalls are as high as 580m (Sutherland Falls – and that heigh is no typo). These waterfalls tumble over near vertical cliff faces and feed rivers that surge their way to the sea. The sweetest purest water you’ll ever drink.


Day one, following an early start and a three hour bus ride we began the hike deep in the Fiordland National Park. A 90 minute climb through dripping beech forest to the top of the tree line certainly got the heart rate up. The view from the top did the rest. Everything below the snowline was draped in moss. Moss hanging off the branches, blanketing every bough, carpeting massive boulders the size of cars. All around us every conceivable shade of green.

Above the tree line you enter what looks like the biggest Japanese garden in the world. Stunted trees, bonsai thanks to the cold and wind, stretch as far as the eye can see. Mountain bogs surrounded by rocks and mosses. The far off screech of our endemic mountain parrot, the Kea, echoed across the valley.

Day two saw us above the tree line and traversing the Harris Saddle. A grey brooding sky shrouded many of the tallest mountain peaks that surrounded us.  A track cut into rock that snaked high above mountain lakes was not for the vertiginous.

What amazed me almost as much as the ‘to die for’ grand vistas was what was at our feet. Given I spent a lot of time looking down so I didn’t rip over some rock and disappear over a cliff I was so often transfixed by the tiny forms of plant life much of it quite alien – lichens, sundews only 1mm across but made up of up to a dozen sticky flowers, the orange and purple fruiting bodies of mosses and worts, delicate white bell shaped flowers, native orchids, and beds of orange berries lying in a blanket of 1mm high ground covers. I am not a good enough wordsmith to describe such beauty literally everywhere you looked.Day three saw us wending our way down through more beech forest to the Routeburn Valley below. Our first experience of the legendary rain, it built in intensity through the morning. Thankfully it wasn’t cold rain. Arriving at our finishing point some 33km from where we’d begun I stood in awe as I watched a distant waterfall, hundreds of metres above me, grow before my eyes. I can’t begin to describe it but I questioned my own eyes. What started as a spectacular but restrained waterfall, doubled and tripled in size in a matter of minutes. That’s what several metres of rain does for ya! Within 30 minutes I was thankful to be out of there.Back to a Queenstown I barely recognised from last year. No international tourists and it was probably one third as busy as it was this time last year. It might sound selfish but I have to say sharing it only with New Zealanders, many of whom judging by the multitude of languages they were speaking haven’t lived here for long and were very possibly visiting Queenstown for the first time, was the New Zealand of my childhood only with ten times the number of restaurants and adventure infrastructure. Every second food outlet had a ‘Help wanted’ sign in the window – often advertising multiple vacancies.Heading home with 5kg of central Otago cherries tucked under my arm I remembered the words of Oprah Winfrey who once described this part of Aotearoa thus, ‘God was just showing off’. She wasn’t wrong.

A most wonderful way to end a year that started off so full of uncertainty and fear but looks likely to finish with the country once again back on its feet.

I’d like to finish by thanking the team at IMMagine for so professionally getting through the most trying of years and of course wishing all our clients, many of whom are still in the middle of a visa nightmare caused by the border being closed, all the best for 2021.

I’m more convinced than ever that what you are going through will be worth it. I expect with the vaccines being rolled out from March 2021 here we should be pretty much back to normal in terms of the border by this time next year (although I am sure there’ll be set backs along the way). I am sure we are more than half way through climbing this ‘mountain’.

Whatever else you do put Queenstown and Central Otago on your bucket list. You might not get to see it quickly as you’d have liked with all the disruption but get yourself there. If you don’t fancy long hikes through the mountains and days without hordes of people or wifi like we do there’s still so much to do down there - summer or winter this is a most wonderful playground for young, old and everyone in between.

Something to look forward to.

Until next year (we close 23 December and reopen 11 January)

As usual thank you for a lovely write up am pretty much interested with positive note, despite my life has been changed drastically without a job more than a year, however am still have a faith and hope to see a lights at end of the tunnel.!

I immensely wish you Merry Christmas and Happy New year to you and Family !!

Iain, thanks for this wonderful post. With the headaches of senior visa officers and unfolding INZ policy, it's easy to lose sight of the reasons we came to this wonderful country. Enjoy the holidays and I hope 2021 is a successful new year... 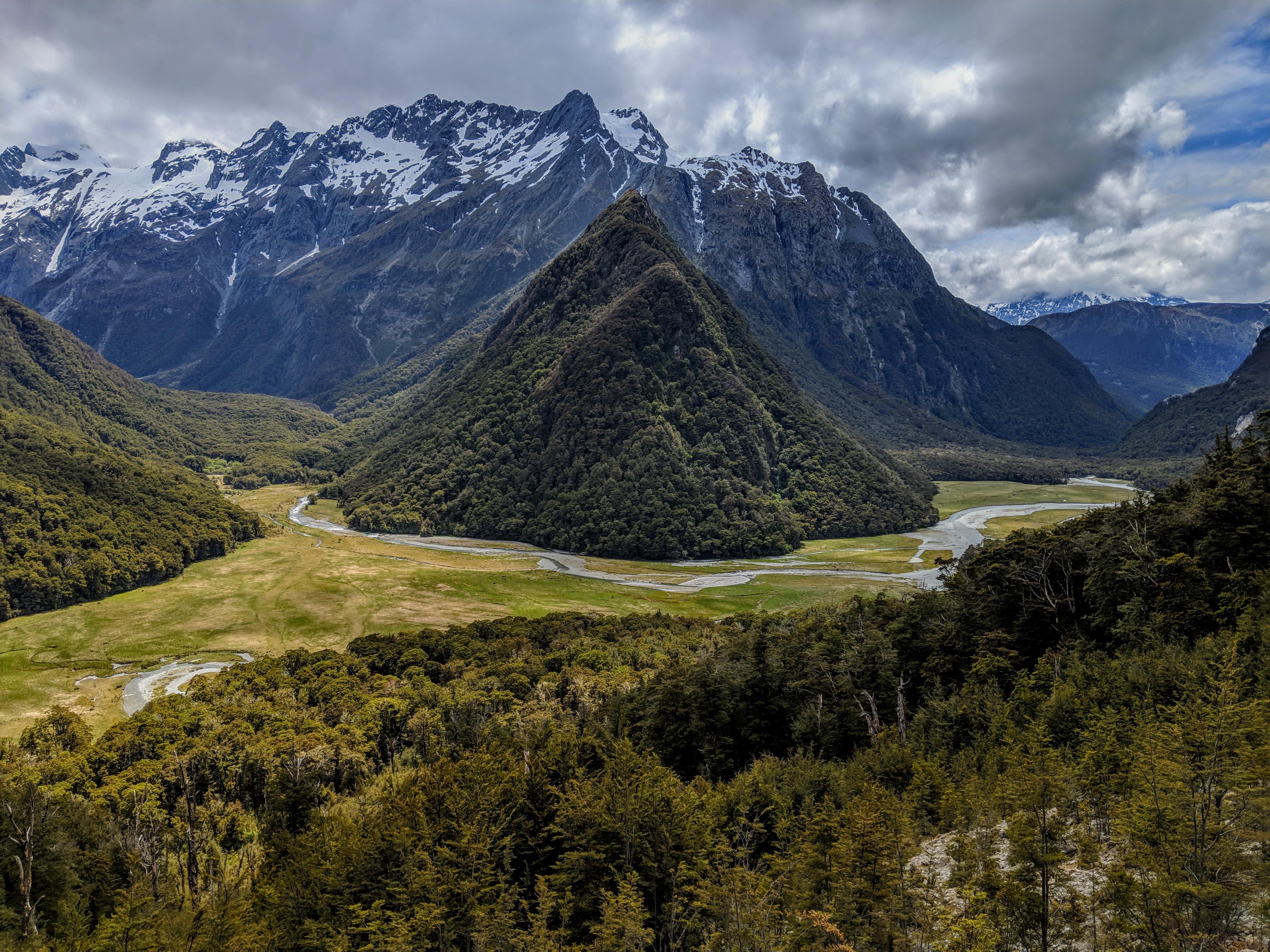